Where are Bitcoin ATMs Located & How to Use Them

A Bitcoin ATM (also known as Bitcoin Kiosk) is a physical device that allows public users to sell Bitcoin and other cryptocurrencies in exchange for cash. In addition, on this device users can buy Bitcoin and send the cryptocurrency to their wallet address. Due to the decentralized nature of Bitcoin. Bitcoin ATMs are not tied to banks in order to make transactions. Instead they are linked to a specific exchange in order to buy and sell the cryptocurrency.

What Coins Can I Purchase at a Bitcoin ATM?

Obviously Bitcoin ATMs support the buying and selling of Bitcoin. However, these physical devices host a number of cryptocurrencies in order to give the users a diverse selection to choose from. Some of these machines will give users access to Litecoin, Ethereum, Bitcoin Cash and other well known cryptocurrencies.

As cryptocurrencies gain more public attention the growth of this industry continues to increase. There are several companies that are popping up every day trying to create Bitcoin ATMs or a similar coin to cash (or vice versa) transaction. However, there are two major companies that have a strong foot hold in this specific sector of cryptocurrency. Genesis and General Bytes are two major players in this field. They have already established Bitcoin ATMs all over the United States and across 60 other countries. Genesis is known for its robust machines that are similar to traditional ATMs. While General Bytes is smaller, sleeker and wall mountable. Both machines are perfect for any business location, the one you choose simply depends on the volume you will expect the machine to receive. The average Bitcoin ATM cost around €3,000-€10,000.

Where Can I Find a Bitcoin ATM?

Normally to find the location of an ATM supported by your bank, you do a quick search on Google to find a store near you. Or you use a mobile banking software that your bank has been promoting. Well, the same methodology applies, however, these systems and software are not owned by a bank. So, a simple Google search will actually tell you where the closest Bitcoin ATM is located. In addition, you can use websites like Coin ATM Radar in order to locate the nearest Bitcoin ATM no matter where you are.

Tip: Click on the Bitcoin ATM to see operating functions. This will let you know the status of the ATM as well the type of cryptocurrencies that are accepted. 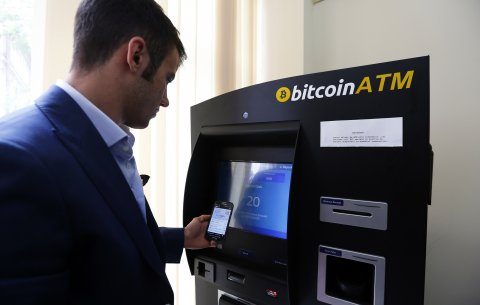 How To Use a Bitcoin ATM

There is a general buy process at all bitcoin ATMs:

This process may vary from ATM to ATM.  It is important to understand that even when machine’s software/hardware support compliance procedures, they are not necessarily activated, as it depends on the operator choice of every particular machine. That is why the same type of machine might have different verifications and limits set up.