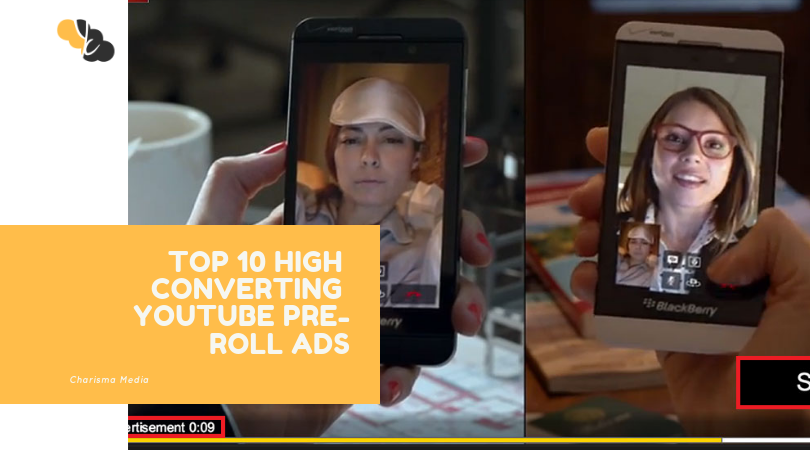 Technically, you wouldn’t want to skip these ads.  We know them all, sometimes we even tend to call them “irritating,” and we hover our cursor on top of the part which says “you can skip in 5…4…3…2…1“.

Want to know what we’re talking about?

Pre-roll ads are continuously evolving, and we’re quite sure that by now, you should have already been familiar with the 6-second unskippable ads and new(ish) format of YouTube pre-rolls called Bumper Ads.

Notwithstanding your ability to skip an ad or not, one thing is pretty sure and clear: these ads have to be original and creative.

While there is no magic formula for a successful YouTube pre-roll campaign, there are some genuine and tried strategies that have worked for businesses in the past.

In this post, we’ll love to showcase a collection of pre-rolls that you won’t just have the vibe to skip (even though, technically you can’t).

We’re about to show you the Top 10 Highest Converting YouTube Pre-Roll Videos that have implemented powerful tactics and nailed it on execution.

These pre-roll videos should be the references that’ll spark your imagination anytime you think of your next YouTube pre-roll video. Note that some of these videos will require figuratively- almost no budget.

When you see the red face of doom, it’s entirely possible for you to start feeling disappointed. But then, the Chipsmore’s Cookie Guy saved the day.

The thing is that many people are just interested in watching your ad and imagine how frustrated someone who’s looking to watch a video after the ad must have felt.

They were perhaps frustrated at first sight of the “broken” video link, then astonished when the Cookie Guy appears, which grabbed their attention and finally, happy when their favorite video starts.

One unique feature of this ad is that it takes its viewers on an emotive roller coaster. After all, who doesn’t have fun on those?

Family’s vacations are the best.

Yay. When on vacation with your family, you guys will get to create timeless memories and sightsee incredible places. Apart from this, is there any other perfect way to bond with family?

Well, Airbnb agrees too that family vacations are the best. And in line with that, their agency- TWBA, produced an enticing and charming YouTube ad that displays the benefits of family vacations: tons of fun, memorable events, and connections.

Campaign: It Comes from Below

One of the things that every baseball player loves and pay close attention to is their stats because it defines a direct measurement of their performance and can even define their value as an individual.

Under Armour wanted to uproot this belief and in six short seconds, Droga – an agency for Under Armour works with Bryce Haper- Washington’s Nationals right fielder to inoculate purpose into all the ball players. The YouTube pre-roll ad inspires and encourages viewers to put more emphasis on their characters rather than their numbers.

This YouTube pre-roll is designed to capture the viewer’s attention one seconds at a time. It opens with the display of cloth hands, leaving you speculated about what exactly is holding the mug of tea. Oh yay, it’s an adorable puppet monkey.

The simplicity and cuteness behind this ad were intended. In its video’s caption, PG Tips conveys a note of commonality against the “ridiculous and silly.” In most cases, the most real messages only require six seconds of your time.

Here’s another high converting, six-seconds YouTube pre-roll ad and it comes from Hefty. Sometimes, if you want to get your customers attention, then you need to embrace the most extreme uses for your products fully.

Hefty took that to heart with their six unashamed seconds that you won’t forget in a hurry. And hey, perhaps it’s the ideal reminder that you need to pick up some of those red cups before that raging bash that you’ve planned.

Burn’s YouTube pre-roll add is so efficient and effective owing to its visually engaging and snappy nature.

Since visuals can be processed 60,000 times faster than text, a glowing fist across the face will be appealing and catchy to the eyes.

The slow-mo nature of this ad also deepens your viewing experience and makes it seem longer.

Even though it’s not just six seconds long and it’s a skippable ad, you won’t just want to skip.

“Unskippable” was just so excitingly original and unusual that it even won AdAge’s 2016 Campaign of the Year and for excellent reasons. The ad commiserates with your displeasure for pre-roll ads so that it can end even before you try to skip it. But then, it’s so witty and unique that you would want to watch the entire ad.

The ad is light-hearted, creative and with a clean and precise message- it ends even before you can skip it.

Oscar’s YouTube pre-roll ad is colorful, sweet and fun. In just 15 seconds, they showcase half a dozen amusing scenarios that can make you smile.

Their message is: “you might never know when you’ll need health insurance, but once you do, Oscar is there.” This ad is simplistic, beautiful and it balances entertainment with a message.

Open Mokka is a German compact SUV that decided to relate using the “SKIP button” in a way that can be likened with the real obstacle on the ground.

In this ad, Open Mokka displayed all the features of the German compact SUV in just 5 seconds.

The campaign was able to pull over 2.5 million views.

Nail Communications created a YouTube pre-roll ad for ASPCA by frightening viewers that if they skip the ad, then they’d “electrocute a puppy.”

The pre-roll playfulness is quite refreshing and fun, and when the video was rolled out, it got a view rate of 18%.

Even though people tend to skip YouTube pre-roll ads when they can, it’s often challenging to find them skipping it when the ads are fun, engaging and creative.

The good parts about having short and clear YouTube pre-roll is that typically you’ll not need to bother yourself by thinking about complicated scripts but something smart and funny. Once you properly set up everything, your brand and products will be exposed to people who would have never known about your business.

Also, have it at the back of your mind that you can extract these wonderfully short videos from longer videos that you have already. Like every other advertisement, YouTube ads requires constant optimizing and updating to achieve optimal results.

But if done correctly, your investment will prove itself to be amongst one of the most significant business decisions you’ve ever made.